ARC Review How to Marry a Royal Highlander by Vanessa Kelly 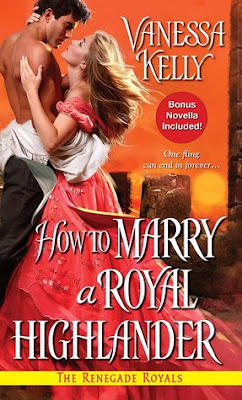 How to Marry a Royal Highlander (The Renegade Royals #4)

Illegitimate yet thoroughly irresistible, the Renegade Royals are leaving behind their careers as daring spies for the greatest adventure of all…

At sixteen, Alasdair Gilbride, heir to a Scottish earldom, fled the Highlands and an arranged betrothal. Ten years later, Alasdair must travel home to face his responsibilities. It’s a task that would be much easier without the distracting presence of the most enticing woman he’s ever met…

After one escapade too many, Eden Whitney has been snubbed by the ton. The solution: rusticating in the Scottish wilderness, miles from all temptation. Except, of course, for brawny, charming Alasdair. The man is so exasperating she’d likely kill him before they reach the border—if someone else weren’t trying to do just that. Now Eden and Alasdair are plunging into a scandalous affair with his life and her reputation at stake—and their hearts already irreparably lost.

What an enjoyable read this book is! It is the 1st book that I have read by this author and I look forward to reading more to this series and her future series.

I love historical romances but I really love historical romances that push the boundaries of what one feels they should be like. This author does a phenomenal job of bringing in the issue of poor eyesight and what society feels about one wearing glasses. I love how she wove this into the story line with how Alasdair felt about Eden's need for them, Eden's mother and society constantly putting her down for wearing them and Eden's final decision about wearing them.

The plot was well written with lots of twists and turns to keep the reader involved. The pace was continual forward movement with no slowness. The interaction between the Scots and the two Sassenach women was believable and amusing.

I believe everyone would love this book but it should be read by 18+ due to some well written steamy parts between Alasdair and Eden.

Vanessa Kelly writes bestselling Regency-set historical romance for Kensington Zebra. Her books have finaled in numerous contests, and she was named by Booklist as "one of the new stars of historical romance." Her second book, Sex And The Single Earl, won the Maggie Medallion for Best Historical Romance. Secrets for Seducing a Royal Bodyguard, the first book in her new Renegade Royals Series, received a starred review from Publishers Weekly and spent four weeks on the BookScan Romance bestseller list. Vanessa also writes USA Today Bestselling contemporary romance with her husband under the pen name of V.K. Sykes. Find her on the web atwww.vanessakellyauthor.com or at www.vksykes.com.

Posted by Sportochick's Musings at 8:51 PM