REVIEW A Most Delicate Pursuit by Pamela Labud 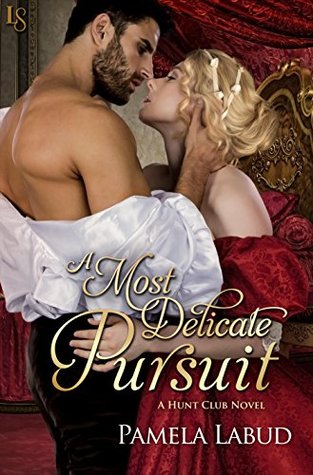 A Most Delicate Pursuit
A Hunt Club Novel
by Pamela Labud

As the captivating Hunt Club series from RITA award finalist Pamela Labud continues, a notorious earl and a brokenhearted young lady are running from love . . . until their foolproof scheme backfires in the most decadent way.
Genre ~ historical romance
Find This Book At ~ Amazon | Barnes & Noble | Goodreads

As the captivating Hunt Club series from RITA award finalist Pamela Labud continues, a notorious earl and a brokenhearted young lady are running from love . . . until their foolproof scheme backfires in the most decadent way.

Though he’s fiercely loyal to his friends, Michael Carver has managed to avoid romantic entanglements by cultivating a reputation as a rake and a gambler. Believing himself incapable of intimacy, the Earl of Blandon avoids anything more than lighthearted flirtations or trysts with married women—which leaves more than enough time to slip out into the wilderness for a little fishing. All is well until Michael agrees, as a favor, to keep his best friend’s stubborn yet alluring sister-in-law company.

After one failed engagement, Beatrice Hawkins would rather become a spinster than risk her heart again. Her family, however, is relentless when it comes to finding her a suitable match. So when the roguish earl suggests they join forces to feign courtship and throw everyone off their scent, Beatrice only hopes the ton will take the bait. But at the hunting lodge where Michael takes her to escape prying eyes, Beatrice finds herself lured in by the unexpected charms of a man who has so much love to give—even if he doesn’t know it yet.

Includes a special message from the editor, as well as an excerpt from another Loveswept title.

A thrilling read that will satisfy the historical romance reader and those who like some action drama to their reading.

Michael is a complex puzzle that Beatrice has fun solving.  Throughout the book the reader is drawn into Michael's belief in himself, his life and what he wants. They will slowly see this belief unwrap and show the true man that is hidden.

Beatrice is well aware of herself, what she wants and sets off to get it. She is refreshing and though somewhat innocent she doesn't come across as too naive so as to be boring. She does take a chance that I cheered for and in fact egged her on in my head.

There are parts of this story that made me cry, anxious, sad and angry. Fear was also part of this story because of the villainous Mr. Bainbridge. His character added the action drama to this story and rounded out this beautiful love story.

I give this 4 STARS. Will you get this book and let me know what you think about it?

A copy was gifted in exchange for an honest opinion via Netgalley.

~ My Reviews of the series ~ 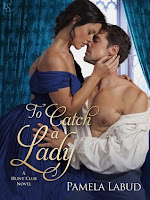 A Most Delicate Pursuit (Hunt Club #2)

Since the age of 13, Pam Labud wanted to be a writer.  So much so, that she asked her Mom and Dad for a typewriter for Christmas that year.  Now, a multi-published author, who’s first book was a 2006 Double RITA finalist, she has finally realized that dream.
In addition to writing Historical and Paranormal romance novels, she also writes short erotic novella’s
When she’s not writing, Pam works as a heart nurse, is married and shares her home with two daughters, 6 dogs and 5 cockatiels.
Pam enjoys watching crime t.v. shows, reading romance fiction, suspence and Manga, and loves anime.
Favorites:
Book: Outlander by Diana Gabaldon
Movie: Casablanca
Animes  Full Metal Alchemist (both first series and Brotherhood), Black Butler, Cowboy Bebop and Ghost In The Shell.

Posted by Sportochick's Musings at 6:18 PM