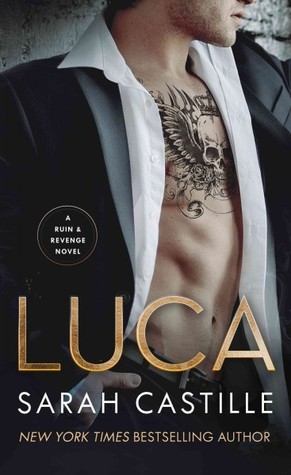 Luca Rizzoli was nearly destroyed by a brutal betrayal that cost him his family. Now a ruthless crime boss in the city of sin, he lets nothing touch his frozen heart--until a smoldering encounter with a beautiful stranger ignites his passion. One night isn't enough for a man who takes what he wants, but his mysterious temptress has slipped away.

For two years police detective Gabrielle Fawkes has lived for revenge. But a night of indulgence with a sexy stranger changes everything. Powerful, charming, and deliciously dangerous Luca, has his own private reasons for offering to help her pursue the drug lord who killed her husband. There's a lot Luca isn't telling her and the more she finds out the less she wants to know.

When Gabrielle becomes the target of the drug lord she has vowed to hunt down, she must do the unimaginable: place her life in a mobster's hands. To save her, Luca must break his Mafia ties--or risk losing Gabrielle forever.

I wasn't ready to like Luca. I did lust for him but I just couldn't see how he could be love material. Boy was I wrong. The author does an outstanding job of keeping his character as an under the radar edgy mafia and then she throws in a heart to really mess with the reader's head in a very exciting way. So yes I did come to love his character in spite of him being mafia.

Yikes, Gabrielle is a larger than life woman that stands out throughout the book. The only thing that I kept getting stuck on was that she was a renegade and was going to get someone hurt. But once again the author develops her character in a manner that makes this whole story work and in doing so created a beautiful love story between two very unlikely people.

Because of the author's ability to merge these two people into a believable story I give this 3.75 stars.

Posted by Sportochick's Musings at 10:56 PM