REVIEW ~ One Summer of Surrender by Jess Michaels

Sportochick's Musings ~ This is my sixth book by Jess Michaels and I love how detailed her books are. Though I have 4 books still waiting for a written review I have read all her books numerous times because they are that good.

One Summer of Surrender
(Seasons #3)
by Jess Michaels 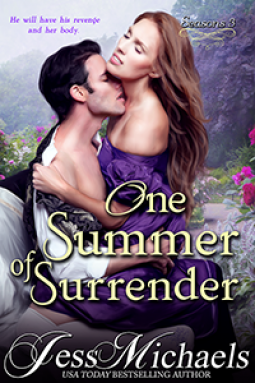 Lucien, the Earl of Stenfax has been engaged twice, but only in love once. That was with his childhood sweetheart, Elise. When she threw him over for a man with more money and a higher ranking title, it broke him. Now she’s widowed and he finds himself drawn to her again, like a moth to her flame.

Elise had her reasons for walking away from Lucien, reasons he doesn’t understand. Back in Society, she’s now financially desperate and is even considering becoming someone’s mistress. But Lucien keeps appearing at the most inopportune moments and it’s only a matter of time before the desire between them explodes.

Time will tell if Lucien will be able to see past his lusty drive for revenge. And if Elise can convince him she’s worthy of more, despite the past.

The dramatic Prologue was the perfect setup for this well plotted story about lost love. It broke my heart and all I can say is "I want to be loved that much".

While reading I decided I want to be like Elise. Though some people would feel she was weak I did not. I admire how far she goes to protect those she loves. I admire how she choses to not be a victim. But I really admire how she dealt with Lucien in the past and the present. I would want to be strong like her if I were ever in the same situation as her.

The author puts together a male main character, Lucien, that shows a brokenness in him as well as his strength of character. He is real and it was pleasurable reading about a man that was not perfect in every way. His emotions are clearly defined and the reader will feel his struggle as they continue through the book.

Secondary characters have been developed in much the same way as Lucien and the reader will want to know the back history to both Lucien's brother and sister as well as other characters in this book. I will definitely go back and read the first two books to this series because I have to know more about them from conversations in this book.

I give this 4 STARS for being an extremely hot emotional read.

Jess no longer supports her books published by Avon/HarperCollins! Check out her newest indie work and work published by Samhain Publishing for better priced books!

Posted by Sportochick's Musings at 1:03 AM