Sportochick's Musings ~ Author May McGoldrick develops this storyline in a subtle and delightful manner causing this book to deserve 5 STARS for the uniqueness of the storyline. 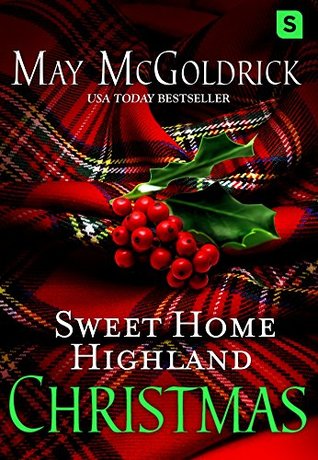 Freya Sutherland is a desperate aunt trying to keep custody of her precocious young niece, Ella. After the death of her father, Freya is willing to do anything to prove she's capable of being Ella's guardian, even if if means marrying for security instead of love.

Recently retired from the military, Captain Gregory Pennington wants nothing more than to make it home in time for Christmas. When his brother hears of his plans to return to the family estate for the holidays, he asks Penn to escort some travelers to the bordering estate.

When Freya and Penn meet their chemistry is instant. Once they realize he's their escort for the journey, there's no escaping their attraction. But Penn has plans that do not include a wife and child. And Freya has responsibilities as Ella's guardian, no matter her growing discontent with her upcoming marriage. With Ella conspiring to get them together, Penn and Freya might just experience a little magic during the holidays.

An adorable lively story with Ella, a precocious 5-year-old girl older than her years and how she tries to marry her aunt off to Penn. Truly a story that will make you laugh while feeling all romantic and warm inside.

Penn is the perfect newly retired military man. Set in his ways and use to being alone but always willing to do his duty. It is amusing to watch how he falls in love with Ella and he begins to unthaw. As the story progresses and his life changes he realizes that possibly he could have more than he ever imagined.

Freya affectionately nicknamed Fie is Ella's aunt and guardian after her sister's death. This strong woman goes against convention to do what is right because she loves her niece and is willing to sacrifice her dreams to keep her niece. I love strong women and this story emphasizes this attribute in Fie to perfection.

Author May McGoldrick develops this storyline in a subtle and delightful manner causing this book to deserve 5 STARS for the uniqueness of the storyline.


My Reviews Of The Pennington Family Series

Two peas in a pod, a pair of halfwits, the Laurel and Hardy of romance fiction...Nikoo & Jim McGoldrick were married in St Patrick’s Cathedral in Dublin 68 years ago before a worldwide television audience. After a honeymoon tour of their oil fields in Iran, they embarked on a writing career that has produced dozens of New York Times bestsellers, two Academy Award Winning film adaptations, and a Nobel Prize for Literature. After all this, fortune FINALLY smiled on them and they won the New Jersey Lottery. Taking their two sons, Nikoo and Jim spent a year backpacking through Africa and then seven years in Tibet, teaching the Dalai Lama the subtle intricacies of Scrabble. Upon returning to the States, these two storytellers wrote forty adult and young adult novels, three of which were RITA finalists and three which were NJRW Golden Leaf winners. They have also written two nonfiction works. Nikoo picked up an engineering degree somewhere along the way, and Jim has a PhD in 16th Century British literature.

These two write under the pseudonyms of May McGoldrick and Jan Coffey and now reside in northwest, Connecticut.

Posted by Sportochick's Musings at 9:14 PM