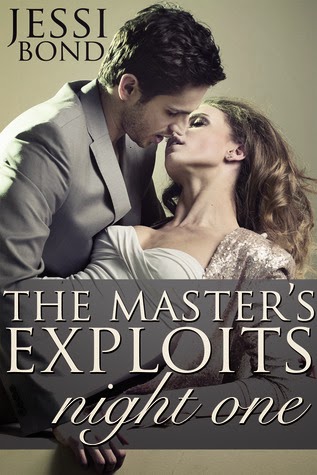 
Just one man, one woman, and a lifetime of steamy, heart-pounding memories. Welcome to THE MASTER’S EXPLOITS.

Night after night, Dalton captivates Grace with sizzling, no-holds-barred retellings of his exploits. In NIGHT ONE, Dalton tells the story of Madison, a woman he met in a bookstore, who soon found herself kneeling at this feet. Grace finds herself wondering what she’s gotten herself into - and whether she’ll ever be able to stop picturing herself in Madison’s shoes.

A NOTE TO READERS: This book is Part One of an ongoing narrative that will be released as a series of “episodes” every Friday, much like your favorite T.V. shows. While each episode has its own story arc that will be concluded by the end, the over-arching romance storyline will continue throughout, reaching its conclusion only in the final episode. Each episode can be enjoyed as a standalone, but it is highly recommended to read the series in order.

My Review ~
After reading Night Two as part of Master Of Desire I had to come and read Night one. Ms Bond does a great job of making you feel like you are Dalton's ghost writer. So sit back with your pen and paper and have fun listening to Dalton talk about his time with Madison.

Grace's character is handled well showing a balance between her being unnerved with ghost writing this erotica and her curiosity as she listens to Dalton's story. One has to wonder if these two will end up together in the end.

This sensual intimate book is almost like being a voyeur and it definitely leaves you wanting to read more.

Posted by Sportochick's Musings at 10:42 PM