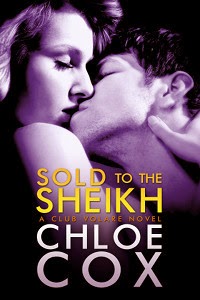 
At Club Volare for one last wild weekend before his family requires him to settle down, Sheikh Bashir doesn't expect to find a woman he can trust, or a woman who challenges him. But Stella Spencer is a challenge, all right: both vulnerable and guarded, beautiful and insecure, and a closet submissive. Only, Bashir is convinced she's hiding something.

Stella is afraid to open her heart to love again after the way she's been hurt, but Sheikh Bashir wants to be the Dom to show her who she truly is--and Sheikh Bashir always gets what he wants.

I was given this ARC for an honest opinion.

This is a book that kind of hits you hard as you can see not only yourself in some of Stella's self depreciation and guardedness but you learn the same lessons she does.

Even more interesting is how Sheikh Bashir, her Dom, develops throughout his teaching Stella to submit and open up. Eventually he, himself learns probably the greatest lesson of all.

Though there were areas that seemed to stall in the beginning when I persisted through I was very glad I did. For this reason I give this a 3.5 STAR but I am going to read the next books to this series.

Posted by Sportochick's Musings at 9:07 PM