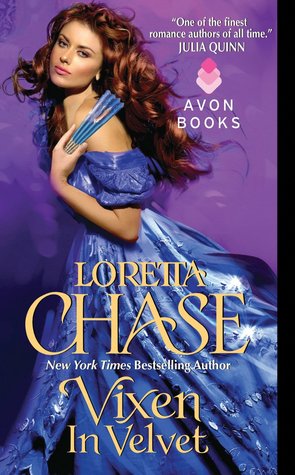 Lethally charming Simon Fairfax, Marquess of Lisburne, has reluctantly returned to London for one reason only: a family obligation. Still, he might make time for the seduction of a certain redheaded dressmaker—but Leonie Noirot hasn't time for him. She's obsessed with transforming his cousin, the dowdy Lady Gladys, into a swan.

Leonie's skills can coax curves—and profits—from thin air, but his criminally handsome lordship is too busy trying to seduce her to appreciate her genius. He badly needs to learn a lesson, and the wager she provokes ought to teach him, once and for all.

A great plan, in theory—but Lisburne's become a serious distraction, and Leonie's usual logic is in danger of slipping away as easily as a silk chemise. Could the Season's greatest transformation be her own?

When I started reading this series, Leonie was the sister that did not grab my attention. The other two sisters were so outgoing and demonstrative she seemed to fall into the background. This story shows a different Leonie, one that is very deep feeling that I came to love and enjoy.

This amusing story between Lisburne and Leonie was so enjoyable that I listened to it three times on audible. I love the humor that the author infuses throughout the book and the narrator is so awesome I have looked her up to buy other books she narrates.

As in the other books I got caught several times laughing out loud and had to share my amusement with my fellow sewers.

Lisburne cracked me up with his "I am not smart" facade and one tracked mind regarding Leonie. His skills in dealing with Leonie created the perfect foil to her no-nonsense rigid personality. Further in the book he became one of my favorite male characters when he closed Leonie in his study with a paper and pen to write her pros and cons...but you will need to read the book to see why this was so amazing and warmed my heart.

This was such an enjoyable read that I give it 5 STARS and of course will listen to it again with all the books in this series.

Loretta Lynda Chekani was born in 1949, of Albanian ancestry. For her, the trouble started when she learned to write in first grade. Before then, she had been making up her own stories but now she knew how to write them down to share. In her teenage years, she continue to write letters, keep a journal, write poetry and even attempt the Great American Novel (still unfinished). She attended New England public schools, before she went off to college and earned an English degree from Clark University.After graduation, she worked a variety of jobs at Clark including a part-time teaching post. She was also moonlighting as a video scriptwriter. It was there that she met a video producer who inspired her to write novels and marry him. Under her married name, Loretta Chase, has been publishing historical romance novels since 1987. Her books have won many awards, including the Romance Writers of America RITA.

Posted by Sportochick's Musings at 9:41 PM