REVIEW In The Spinster's Bed by Sally MacKenzie 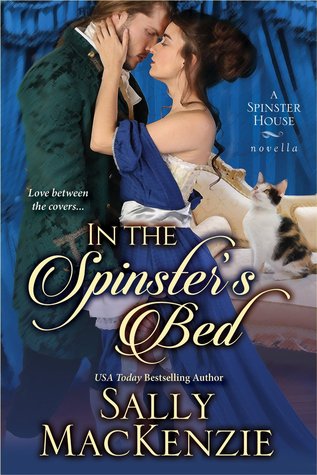 At Spinster House, a woman can enjoy the spoils of single life—or find the love of a lifetime…

It has been twenty years since Lord William Wattles laid eyes on Annabelle Frost. Still, he remembers everything—her ethereal beauty, her bookish intelligence, her surprisingly modern attitudes about love...and lust. But Belle’s allegedly wanton behavior led her father to send her away to save the family’s reputation. Now she resides at Spinster House in the village of Loves Bridge, where an unmarried lady can live—and in Belle’s case, support herself as a librarian—in peace...

Beautiful, passionate Belle—sworn off marriage? William can’t believe the woman he once knew could end up like this. But when the hands of fate bring him to Loves Bridge, his long-lost love might just end up back in his arms. Is their unwavering desire worth the sweeping scandal that is sure to follow them both? Absolutely.

This is a 4 STAR historical romance with a spin on it. The book has some mystery to it and a lot of fun. What a great idea "Spinster House"! I love how it came to be and what the criteria was for it. I would love to see a book on the woman that this house was started on. It would be a great story.

Annabelle's story is a common one in many ways for the time that she lived in, but she is not common at all. This story shows a positive spin on a not so positive time in her life and is handled in a manner that leaves the heroine empowered.

William came across as a loser type hero in the beginning but he quickly turned around as the story progressed and he deserves the readers compassion as they learn more about his life. Yes there were times I wanted to kick him but mostly I really thought he was exactly what Annabelle needed.

I give this 4 STARS...for being a fun romantic read. Are you going to read this book? I hope so.

Sally MacKenzie decided to become a writer in grade school when she read one of her stories to the class. Her classmates laughed and she was hooked. She sat down immediately to pen her first novel.

The hooked part is right--cursed might be a better description--but the sitting down and writing part came later. Much later.

Sally eventually went on to college, majoring in English, and, upon graduation, did what many English majors do--she went to law school. But she still couldn’t shake her dream of writing fiction. Midway through law school, she faced the fact that she really did not want to be a lawyer. She took a permanent leave of absence, came home to the Washington, D.C. area, and sat down to type her first novel.
Well, not exactly.

She did come home and write, but mostly she wrote regulations for the United States government’s school nutrition programs. (Ketchup as a vegetable, anyone?) When her law school sweetheart graduated, he moved to D.C. and they got married. A couple years later, the first of their four sons was born, and Sally “retired” to manage their family. She wrote a story or two and some picture book texts, all now stored away in a filing cabinet, but she spent most of her energies on baby tending which rapidly evolved into carpool driving. She became an extremely skilled scheduler, getting all four boys to soccer, basketball, baseball, track, swimming, piano, scouts, and birthday parties without ever losing one. (Okay, she did lose the youngest for a few minutes, but she found him before he’d toddled into the parking lot.) And she did more writing--school newsletters, auction programs, class plays, swim league guidance, and the acclaimed annual MacKenzie family newsletter--but no fiction.

Finally, the boys started driving (Eek!) and leaving for college. The nest was emptying and she wasn't getting any younger. The time had come to chase the dream or let it go for good, so she sat down at the computer and wrote. And rewrote. And rewrote again until she had a polished manuscript. She joined the Romance Writers of America, and when the plea went out for Regency manuscripts for the 2004 Golden Heart contest, she sent in The Naked Duke. The stars aligned. She made the final round, and one of the judging editors liked the manuscript and offered to buy it.

When not writing or obsessing over the various mysteries of book promotion, Sally can be found at the gym working hard to age gracefully, at the pool on the SLOW side of the Masters swim practice, or at one meeting or another volunteering at the helm of the summer swim league.

Posted by Sportochick's Musings at 1:13 AM