REVIEW Beyond The Call Of Duty by Tracy Tappan 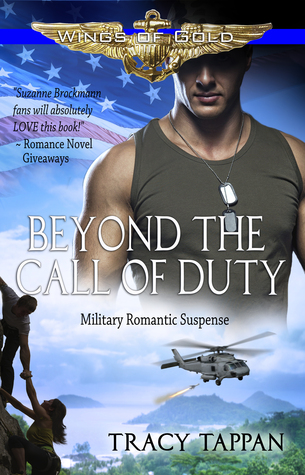 Eric “LZ” O’Dwyer, a senior lieutenant stationed out of San Diego, is in command of his own helicopter detachment out of the HSM-75 Wolf Pack. Deployed off the coast of South America on a counterdrug operation, Eric jumps at the chance to take down a ruthless drug lord. But to do it, he’ll have to join forces with badass DEA Agent Nicole Gamboa. Infiltrating the drug lord’s mansion is crucial to the mission, and to pull it off, Eric and Nicole have to play out an intimate scene together that leaves them both reeling. In the aftermath, Eric wants to foster something real with Nicole, but there is a secret part of Nicole’s life that makes a relationship impossible. The mission erupts again, and Nicole and Eric end up relying on each other in ways they’d never predicted. The stakes are raised to their highest when the drug lord gains the upper hand, and living or dying hinges on a final showdown between Nicole and her past…and whether Eric can get to her in time!

An intense well written new military series by Tracy Tappan that had me hooked from the first page. This book starts out with a fast intense pace using military terms to provide the reader with a stronger sense of correctness as opposed to make believe. This author spent a fair amount of time created a glossary to explain to us what the terms meant making for me a very enjoyable and learning read.

Her characters were well developed and multifaceted. Eric and Nicole's interactions distinguish for me an element to the storyline outside the "too sweet and I know how this ends" in most books. I know the reader will love the resolution between their attitudes about each other.

There are several secondary characters in this book and the one that stands out the most is Lieutenant Kyle “Mikey” Hammond. For me his attitude just rubbed me the wrong way but of course when that happens I always want to know his story so I look forward to learning more about him. Also Nicole's DEA partner, Ryan Aagaard, really caught my eye and it was amazing that the author was able to change my opinion of his in your face attitude by the end of the book.

I recommend this book to people who like some meat in what they read. And guys you will like this read. I give it 5 STARS.

Tracy is the bestselling and award-winning author of gritty romance, her books spanning genres across paranormal (The Community series), military romantic suspense (The Wings of Gold series), and medieval historical (The Baron’s War trilogy). During nearly twenty-five years spent as a naval aviator’s wife, she lived all over the United States and in Europe, enjoying seven years overseas in the diplomatic community, first in Rome then in Madrid, until she settled back in San Diego. Tracy holds a master’s degree in Marriage, Family, and Child Counseling (MFCC), loves to play tennis, is a volunteer puppy raiser for Guide Dogs for the Blind, and enjoys a good glass of wine.

Posted by Sportochick's Musings at 9:12 PM