REVIEW How To Manage A Marquess by Sally MacKenzie 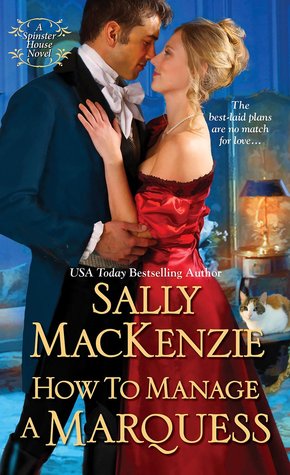 Two possible futures loom before Miss Anne Davenport. The first option: sharing an unhappy home with her father and soon-to-be stepmother. The second: a life of independence at the Spinster House--if only her friend, Cat, would vacate the premises and marry the Duke of Hart. A well-placed whisper about the pair's secret tryst might speed the course of true love. But the duke's stubborn cousin poses an obstacle. A ridiculously handsome, very persuasive obstacle…

Nate, Marquess of Haywood, has spent his life looking out for the duke, hoping to stave off a family curse. The only way to keep his cousin alive is to keep him single. That means convincing the intriguing Miss Davenport that her lovely lips could be put to far better use than gossiping. Kissing, for instance. In fact, Nate is beginning to hope that Miss Davenport's destiny lies not in the Spinster House at all, but with him …

A delightful, fun, historical romance that will keep the reader engaged through the last page. The authors idea behind the spinster house is wonderful with a mysterious cat adding some fun to the plot along with creating a bit of intrigue.

Anne's character is handled with finesse keeping her feelings exposed for the reader so you feel her experiences internally as you read. Her interaction with the two small boys will warm your heart and rounds out the storyline creating a fulfilling read.

Nate is a dedicated cousin spending his whole life keeping his cousin, the duke, safe from a family curse. His reactions to everything regarding Anne caused me to laugh several times and I looked forward to seeing if he could get out of his own way to allow himself to have a happy fulfilling life.

This book has several relationships going on at the same time so the reader will have a lively time keeping up with who's doing what.

I give this 4 STARS...for being a fun romantic read.

Sally MacKenzie decided to become a writer in grade school when she read one of her stories to the class. Her classmates laughed and she was hooked. She sat down immediately to pen her first novel.

The hooked part is right--cursed might be a better description--but the sitting down and writing part came later. Much later.

Sally eventually went on to college, majoring in English, and, upon graduation, did what many English majors do--she went to law school. But she still couldn’t shake her dream of writing fiction. Midway through law school, she faced the fact that she really did not want to be a lawyer. She took a permanent leave of absence, came home to the Washington, D.C. area, and sat down to type her first novel.
Well, not exactly.

She did come home and write, but mostly she wrote regulations for the United States government’s school nutrition programs. (Ketchup as a vegetable, anyone?) When her law school sweetheart graduated, he moved to D.C. and they got married. A couple years later, the first of their four sons was born, and Sally “retired” to manage their family. She wrote a story or two and some picture book texts, all now stored away in a filing cabinet, but she spent most of her energies on baby tending which rapidly evolved into carpool driving. She became an extremely skilled scheduler, getting all four boys to soccer, basketball, baseball, track, swimming, piano, scouts, and birthday parties without ever losing one. (Okay, she did lose the youngest for a few minutes, but she found him before he’d toddled into the parking lot.) And she did more writing--school newsletters, auction programs, class plays, swim league guidance, and the acclaimed annual MacKenzie family newsletter--but no fiction.

Finally, the boys started driving (Eek!) and leaving for college. The nest was emptying and she wasn't getting any younger. The time had come to chase the dream or let it go for good, so she sat down at the computer and wrote. And rewrote. And rewrote again until she had a polished manuscript. She joined the Romance Writers of America, and when the plea went out for Regency manuscripts for the 2004 Golden Heart contest, she sent in The Naked Duke. The stars aligned. She made the final round, and one of the judging editors liked the manuscript and offered to buy it.

When not writing or obsessing over the various mysteries of book promotion, Sally can be found at the gym working hard to age gracefully, at the pool on the SLOW side of the Masters swim practice, or at one meeting or another volunteering at the helm of the summer swim league.

Posted by Sportochick's Musings at 12:54 AM